Fremantle Ports achieved 24.3% of containers on rail in March this year, re-affirming it as a leader among Australian container ports.

Fremantle Ports achieved 24.3% of containers on rail in March this year, re-affirming it as a leader among Australian container ports. “That percentage not only well exceeds the State Government target of 20%, but is significantly higher than the five-ports average of 11.4% for Australia,” Fremantle Ports’ CEO Michael Parker said.

The percentage of containers on rail is an important metric for Fremantle Ports as it represents an estimated 10,985 trucks off the road network. Moving more freight to rail means a reduction in noise and traffic volume.

The introduction of new rail wagons in November last year means one train travelling to or from North Quay can move up to 100 containers at once with a single locomotive - the equivalent of taking up to 65 trucks off the roads.

“Last year, there were 100,000 fewer trucks on the road coming in and out of Fremantle, as a direct result of strong use of rail. It’s strategic, smart logistics and makes sense,” Mr Parker said.

The efficiency of Fremantle Ports’ North Quay Rail Terminal is also a significant contributor to the result, with the tailor-made facility well set-up for the rapid transfer of containers on and off trains.

Mr Parker said other Australian states didn’t have the benefit of such a facility.

“Trucks obviously continue to play a role in the movement of containers to and from Fremantle, particularly over short distances, but rail has a very beneficial part to play in the mix.”

With the introduction of further initiatives, Fremantle Ports is on-track to meet the State Government’s aspirational target of 30% of container freight on rail. 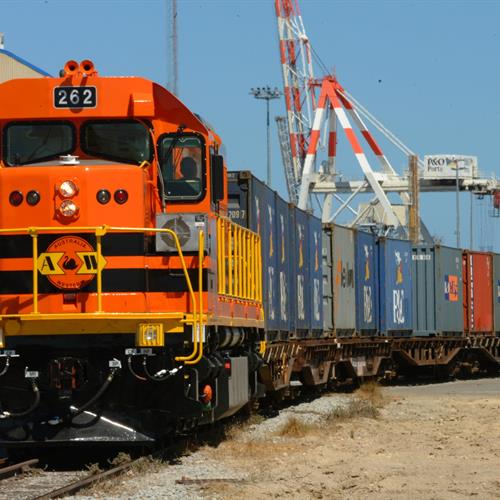