Intermodal Link Services, which operates Fremantle Ports' North Quay Rail Terminal, has invested in new wagons, increasing rail capacity on a single trip from 92 TEU (standard containers) to 100 TEU and reducing truck movements around the port.
Containers flowing to and from the Fremantle Inner Harbour on rail are now on new wagons.

This equates to more than 300 TEU extra per week transported by rail which results in about 200 fewer trucks movements on the road per week.

This also equates to an extra 1.5% increase in the rail share of containers transported landside per month.

Intermodal Group State Manager Adam Lebihan said the new wagon capacity would definitely assist leading up to the Christmas peak period and beyond.

About 20% of containers coming into and out of the Fremantle Inner Harbour are moved landside by rail.

Increasing the volume of containers moved by rail to and from the Fremantle Inner Harbour is a strategic priority.

Increased use of rail for container freight reduces the rate of growth of port-related truck transport and continues to have strong community support.

See a great video on rail at Fremantle Port by Intermodal Group here.

Rail transport is critical to the movement of containers at Fremantle Inner Harbour, with rail share for container freight averaging 18.4% for the year, but peaking at 22.4% in May 2021. Increasing rail mode share is a key Government priority, enabling significant numbers of containers to be transported safely and efficiently, while contributing to reduced congestion on our roads, with each loaded train removing up to 60 truck movements.

In the 2020-21 financial year, almost 150,000 TEU were moved on rail, which equates to a reduction of more than 100,000 truck movements on roads to and from the port. Rail volumes have almost doubled over the last 10 years, and the Port of Fremantle consistently records the highest rail market shares across all capital cities in Australia.

There are currently between 6 or 7 trains coming in and out of the port every day. These trains can carry up to 90 twenty-foot containers transporting a range of items, from large amounts of agricultural product such as grain and malt, to our day-to-day import items.

Rail receives financial support from the State Government in recognition of the vital role it plays and the inherent difficulty it has in competing with road transport over short distances.

As part of the Watco group of companies, Intermodal Group handles more than 150,000 container movements through the Port of Fremantle each year and plays an important role in fulfilling the State Government’s policy aims of reducing truck traffic throughout the Perth metropolitan area. 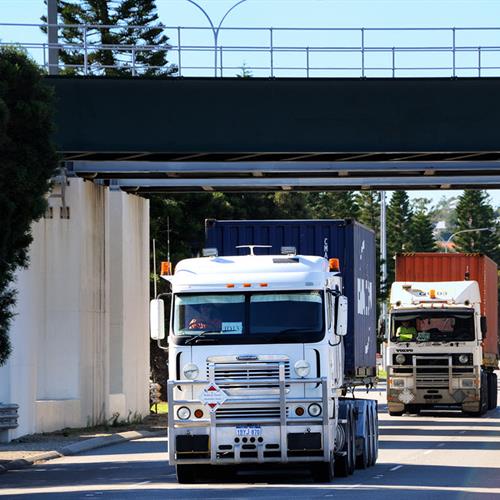 Fremantle Port has highest proportion of containers carried on rail in Australia.
View